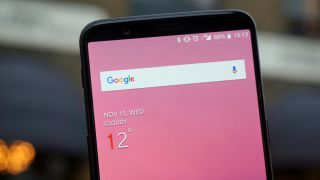 The OnePlus 5T, as the name suggests, isn’t a completely new handset – rather, it’s an incremental upgrade of the OnePlus 5.

[Update: The OnePlus 5T is now available in a limited edition Sandstone White finish. We’ve been hands on the new color variant and have added pictures and our thoughts on the finish in this review. An update to Android Oreo is also nearly ready.]

It’s not just an upgrade though; it’s also a replacement, as OnePlus has ceased production and sales of the phone it launched just six months prior to the arrival of the OnePlus 5T.

This isn’t a surprising move, as OnePlus did exactly the same thing in 2016 when it introduced the OnePlus 3T half a year after launching the OnePlus 3.

So what do you get with OnePlus’ second generation ‘T’? The main talking points include the biggest screen the firm has ever put on a phone, a tweaked design, improved rear camera and face recognition.

In short, there’s enough new stuff to justify its existence without it offering a radically new smartphone experience.

This makes the OnePlus 5T cheaper than pretty much all of its flagship rivals – but significantly the difference in spec between them is the smallest it’s ever been.

As far as a OnePlus 5T release date goes, the handset will be available from November 21 in North America, UK and Europe, with China, Hong Kong and India getting the phone soon after.

In the UK, OnePlus has signed an exclusive deal with O2, with the network offering the handset on a range of tariffs for those who don’t fancy buying the 5T outright. You can see the best OnePlus 5T deals O2 has to offer by clicking here.

The single biggest change on the OnePus 5T is the display, with the handset boasting a 6.01-inch Full HD AMOLED panel with a 18:9 aspect ratio that follows this year’s trend of elongated screens on the iPhone X, Google Pixel 2 XL, Samsung Galaxy S8 and LG V30.

It’s the first time OnePlus has increased the size of the display on its core handset (the smaller OnePlus X aside), making this the biggest screen we’ve ever seen on a handset from the Chinese firm.

While its size and aspect ratio may see the OnePlus 5T pull inline with the flagship handsets it’s looking to topple, there is still one spec which denies it full membership of the high-end display club: resolution.

OnePlus has once again opted to stick with a Full HD resolution, at 1080 x 2160 with a 401ppi pixel density, while rivals all boast QHD (2K) displays.

It doesn’t mean the screen on the OnePlus 5T is poor, and thanks to the AMOLED panel colors are bright and punchy, but when you slide it alongside the competition you can see it’s not as sharp. In isolation though, it’s difficult to pick any real fault with it.

OnePlus co-founder Carl Pei also revealed on Twitter that he fooled a fan into thinking it did have a QHD display, when actually it’s stuck with Full HD. 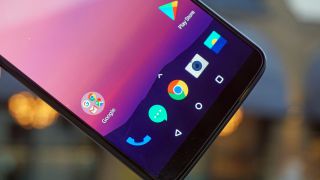 The default color balance does seem to be a little blue, and if that doesn’t suit your eyes you can change this in the settings menu.

The screen calibration options enable you to switch to SRBG, DCI-P3, adaptive mode or customize your own settings, although the default mode does give you the punchier colors.

Selecting another mode mutes the vibrancy, but does give a more natural look to colors, especially when viewing images. The choice is yours, but we opted to stick with the default setting for the majority of our OnePlus 5T review.

OnePlus has also included a feature it calls Sunlight Display, which automatically detects harsh light and adapts the display for the best viewability; it’s basically an auto brightness mode, but it also knows what you’re doing on screen (whether it’s a game, movie or general navigation) and will optimize the display accordingly.

We didn’t notice the OnePlus 5T adapting the screen during our review period, but we also didn’t experience any viewability issues, which suggests that Sunlight Display does work, if only subtly.

The bigger display has had a knock-on effect in terms of the design of the OnePlus 5T, with the bezels above and below the screen getting slimmed down to provide a sleeker look and an 80.5% screen-to-body ratio.

That reduction in bezel has necessitated another design change too, with the fingerprint scanner and physical navigation keys disappearing from the front of the phone.

Biometric fans needn’t worry though, as the digit reader has been relocated to the rear of the device, and its centralized position means it’s easy to hit with your forefinger – and of course there’s now face recognition too, of which more in a moment.

The OnePlus 5T continues with the premium metal unibody design of the phone it’s replacing, which makes it look good and feel great in the hand, with the gently-curving rear helping it nestle nicely into the palm. 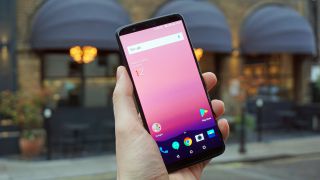 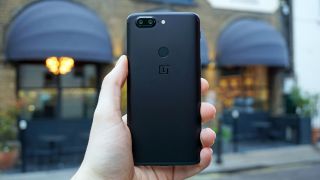 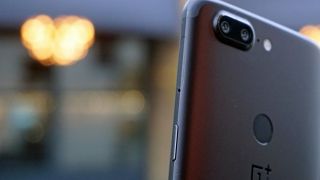 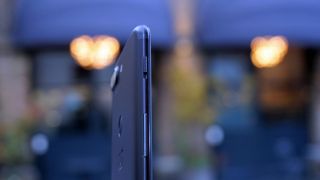 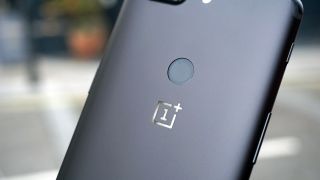 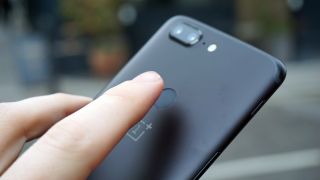 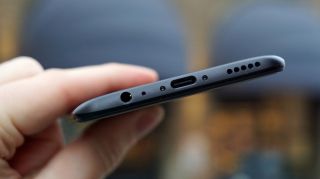 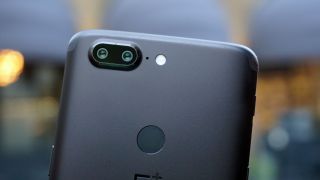 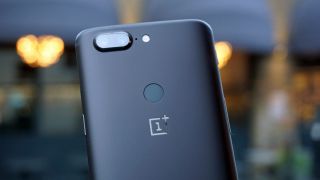 Something the design doesn’t offer, though, is much grip, so you may want to invest in a material or silicone case to give you a little extra purchase – although it will add to the phone’s size in your hand.

You’ll find that the power/lock key on the right, and the volume rocker on the left, fall easily under thumb and finger when you’re holding the phone in portrait, and OnePlus continues with its notification slider on the side of the handset, allowing you to easily switch between silent, do not disturb and loud modes.

In January 2018, OnePlus launched a new color variant of the OnePlus 5T. It’s a limited edition, and we’re not sure how many devices have been produce in the Sandstone White finish, but it does offer something a little different to the stock Midnight Black color.

First of all it’s white (duh), but only on the back. The front of the handset remains black, as does the rear camera bump. While we would have liked a white surround on the front too, we do like the black camera bulge.

The Sandstone White OnePlus 5T uses the same black volume rocker, power switch and SIM tray, providing more contrast against the white finish. Then there’s the alert slider, which is an eye-catching red. 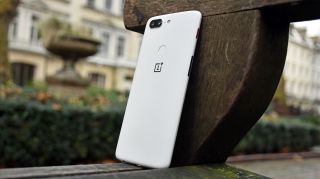 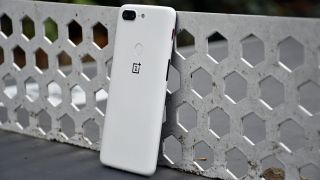 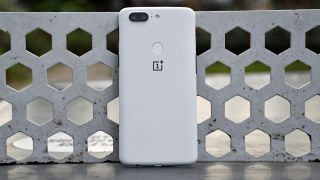 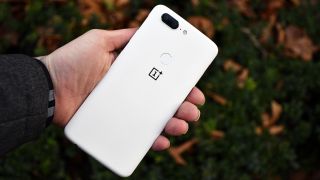 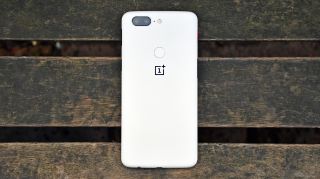 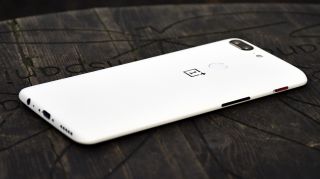 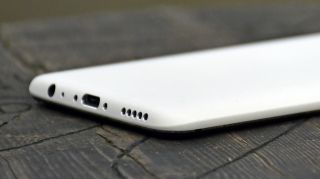 If this looks familiar, it’s because it’s exactly the same color composition OnePlus used for the Star Wars Edition of the handset (launched in just a handful of countries) minus the famous franchise’s logo on the back.

What the white finish does provide is more grip, with a textured finished which more closely resembles the original OnePlus One. The trade-off is the white version doesn’t feel as premium in the hand, and if the OnePlus One is anything to go by it could end up getting quite dirty relatively quickly.

It’s worth noting that OnePlus provides a clear plastic case in the box with both the Midnight Black and Sandstone White models, which should keep it looking smarter for longer.

Another plus point on the OnePlus 5T is that the headphone jack has also been retained, allowing you to plug in your headphones without the need for a clunky adapter.

The camera bump from the OnePlus 5 remains on the 5T, but this time around the edges of the protrusion have been more lovingly sculpted into the main body of the device for a more uniform and slick look.

OnePlus claims it has added an anti-fingerprint layer to the finish on the OnePlus 5T, but we found that it still got grubby pretty easily, although marks and prints are easy enough to wipe off.

At launch the OnePlus 5T is available in just one color, Midnight Black, with no word on whether more hues will be on offer in the future.

From the back, it looks like the OnePlus 5, only with a fingerprint scanner

Another key feature, and a first for OnePlus, is the inclusion of face recognition tech as the brand attempts to ride the coattails of the iPhone X.

Face recognition on the OnePlus 5T isn’t as advanced as Apple’s offering, but it’s still surprisingly good, using over 100 facial identifiers to check it’s you.

It’s used only for unlocking the handset, and you’ll need to double-tap the screen or press the power key to utilize it.

The good news is that it’s really easy to setup, with the phone requiring only a matter of seconds to lock in your look. 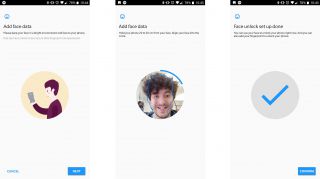 It’s incredibly fast, with almost no delay between you tapping the screen or button and your home screen appearing before you. OnePlus claims the tech can identify you and unlock the handset in just 0.4 seconds, and we’re inclined to agree.

This does mean it’s a touch slower than the fingerprint scanner (0.2 seconds), and it requires you to be looking almost directly at the phone for it to work.

However, we did find that face unlock worked at some impressive angles, which means you don’t have to hold the OnePlus 5T directly in front of your face for it to work.

Face unlock on the 5T requires a light source – street lights at night are enough, but the screen brightness itself isn’t – to check your face.

The OnePlus 5T can handle glasses and no glasses, so whether or not you’re wearing them the phone will know it’s still you, as long as your eyes are still visible. Where it struggles is when the eyes are covered. 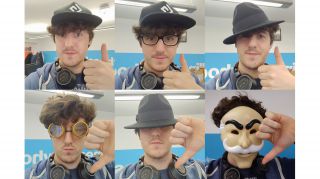 The OnePlus 5T unlocked for us in the top row, but the disguises worn in the bottom row saw the 5T lock us out.

We tried face unlock in several different scenarios (as you can see above), but when we wore a low slung hat, and then blinkered goggles, the 5T wouldn’t unlock.

We also passed it around the office, friends and family to see if anyone else’s face unlocked the handset, and the good news is they didn’t. The likelihood is that the technology may be fooled on rare occasions – as it has been on the iPhone X – but it feels secure.

In the future OnePlus plans to expand the use of face recognition to enable you to log in to apps and verify purchases, but for now it’s using the OnePlus 5T as a test bed for the technology to make sure it’s secure.

Did you find these tips helpful? Want to know more about any other hack? Please feel free to drop a message and let us know if there’s any specific hack that you wish to learn about. Follow Techlone on Facebook, Twitter and Google+
5Toneplusreview
0 751
Share FacebookTwitterGoogle+LinkedinPinterestStumbleUponReddItTumblrDiggWhatsAppEmail