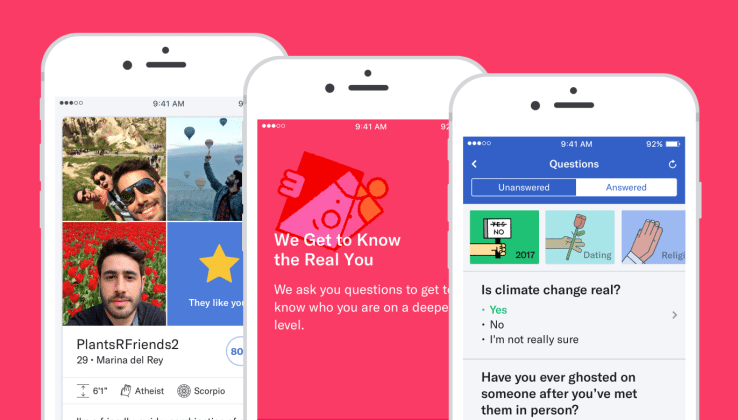 OKCupid’s users are angry – very, very angry. Just ahead of the new year, the company made a radical change to its policies, and now requires people to use real names instead of an OKCupid username, as before. The change eliminates one of the biggest differentiators between the dating app and rivals like Tinder and Bumble, which have users log in via Facebook in order to use their real name on their dating profile.

Since the update, announced last week, OKCupid’s app has been slammed with bad reviews on the App Store. Over half the reviews (56.3%) for the month of December have only one star – up from around a third in November. That would give the app a dismal 2.2 star rating if only the reviews for the past month were on display in the App Store. (Apple, though, now lets developers choose to not have their ratings reset when they launch a new version; OKC has selected this option to maintain its 4.2 star rating instead.)

The company explained the reasoning behind the change in a cheeky blog post which made fun of the silly usernames people have adopted on its site over the years, like DoritoprincessXO, DaddyzPrincess29, StayingPawwsitive, Dootdootledootd0, Britney__Tears, laidback___stu, BigDaddyFlash916, and unicorn__jizz, for example. (OKC said these were, in fact, real usernames people had used on its service, but were edited slightly to protect people’s privacy.)

It also tied the switch to the end of an era for usernames – noting that AIM recently shut down for good. The suggestion, basically, was that maybe the time for goofy online handles has ended as well.

These aren’t good enough explanations for many of OKCupid’s users, and frankly, they’re a bit dismissive as to why people chose OKC in the first place.

As some reviewers have pointed out, the combination of the real name policy and OKC’s push into discovery via features that aims to find nearby matches by shared interests – could mean less privacy for its users.

After all, armed with a name, age, photo, and city, it’s fairly trivial these days to search for the person in question via Google or Facebook and find out who they are, where they work, and where they live. That’s not information all dating app users want to immediately give out to people who are otherwise strangers. 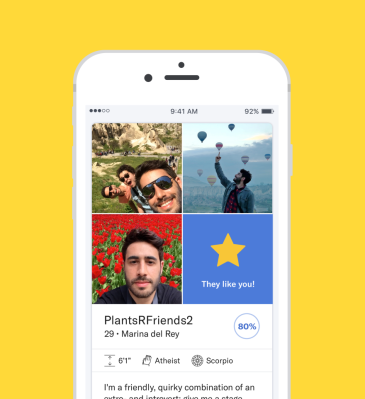 “Some of us prefer the privacy of individual user names,” writes one angry user, ‘UniqueTwain,’ in an App Store review. “When it comes to my name I would prefer someone get to know me and simply ask. It’s not like I go to a party with my nickname or a name badge or monogrammed clothing on. No, I have to talk to people and get to know them and let them tell me their name. Why should it be any different online?”

Several others pointed out in their App Store reviews and blog post comments that OKCupid’s announcement had come across as “condescending,” “rude,” and “patronizing.”

The company may have cherry-picked some of the more cringeworthy usernames to poke fun at, but many felt that usernames were generally an easy and quick way to get a feel for what someone was like, while still protecting their privacy.

There’s also a general sense that OKCupid is trying to become too much like Tinder instead of keeping the features that made it unique. For example, the app has discontinued things people liked, such as the ability to see visitors, as it increased its focus on Tinder-esque features like the prominence given to user photos.

“Match.com should just shutter OKCupid at this point — they already own Tinder, no need to build a second Tinder,” scoffed tby77 in another App Store review. (Match is the parent company to a number of dating apps, including OKCupid, Tinder, PlentyofFish, and others.) 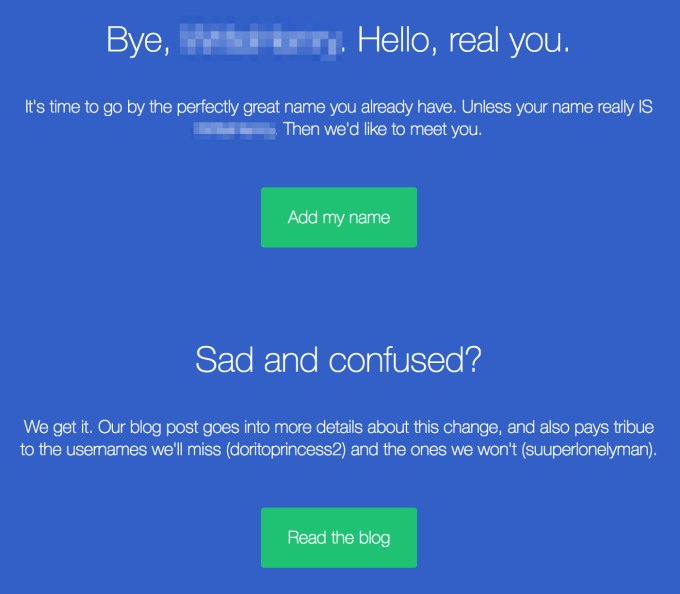 To make matters worse, OKCupid locked some people out of the app until they complied with the new policy, rather than offering a grace period.

Others were angry because they had recently paid nearly $50 to OKC to have the ability to change their username by way a premium upgrade. (The only way to have this option at the time.) They aren’t getting a refund, even though the name change feature is now being handed out freely.

Though the reviews are brutal, OKC’s App Store ranking hasn’t really been impacted yet by this change (it’s #53 in Social Networking on iOS). That may be because Apple’s rankings only take into account app installs and velocity of those installs – it doesn’t know how many people are deleting the app.

There is at least one caveat to OKC’s new policy – you don’t have to use your legal name, the company notes at the bottom of its announcement. It says, you can use the name you’d like your date “to call you” instead.

It later tried to further clarify this in a tweet, explaining that nicknames or even initials are permitted, and that full first names aren’t necessary.

We love our members. You do not need to use your government name or even your full first name. Use the name, nickname, or initials you’d like your date to call you on OkCupid.

If OKCupid isn’t actually requiring real names, why kill the username policy at all?

OKCupid provided the following statement in response to our questions about the policy change. And by statement, we mean they wrote another blog post:

To give you some more background as to why we made the decision to remove usernames — this is a part of our mission to add more substance and depth to dating. OkCupid wants to make the experience more personal. Having a name adds more of a human element versus a ‘username’.

In response to the ‘workarounds’ we have stated that in order to qualify as a name it just has to be two letters minimum, no numbers or symbols. We also have a list of banned words that would not qualify. It’s important to clarify that this does not need to be your real/legal name, it can be any name that you want someone to call you.

We don’t have any plans to bring usernames back. We know some folks don’t like that usernames are going away but we get many (thousands!) of messages from folks who say they are offended by some of the usernames people make…or they just have a really really hard time coming up with one and can we help them create something that incorporates dinosaurs, tacos or pizza and ideally all three. Or they came up with a seriously awesome user name, and now they forgot it and can we please help them recover it. And we get thousands of requests to change their username because it doesn’t feel like the right thing anymore.

We are about safety and security of our users more than anything. That’s why we were the first dating app to introduce the Dating Pledge earlier this year. That’s why we have an incredible moderation team that personally reviews any issues and gets rid of folks that violate our rules.

Since we’ve made the change, we’ve heard from lots of people that it makes OkCupid a bit more human. And isn’t that the right move for a dating app?

Did you find these tips helpful? Want to know more about any other hack? Please feel free to drop a message and let us know if there’s any specific hack that you wish to learn about. Follow Techlone on Facebook, Twitter and Google+
OKCupidspolicyratingrealrebelsinksusers
0 4,272
Share FacebookTwitterGoogle+LinkedinPinterestStumbleUponReddItTumblrDiggWhatsAppEmail