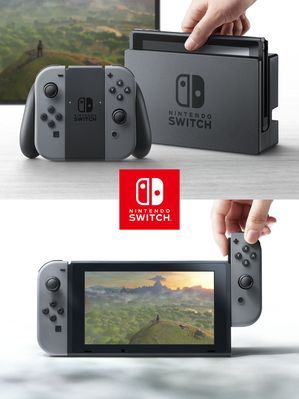 On Thursday, Nintendo will likely reveal new details on when it will launch its next video game console. The video game company is hosting an event in Tokyo at 11 p.m. ET, where it is widely expected they will unveil a release date and price for the Nintendo Switch, its home console players detach from a docking station to take on the go.

In October, Nintendo first revealed the Switch, which is expected to make its debut this March. Players attach the tablet-like device to a dock to play at home on a television with standard video game controllers. Players can also remove the tablet, using a pair of “Joy-con” controllers on each side to play games while away from home.

A video montage of the Switch showed players using the controllers in each hand, or allowing two users to each have their own controller to play racing game Mario Kart.

The launch of Switch is important for Nintendo, as it seeks to rebound from poor sales of its last home device, the Wii U. Featuring a tablet-style controller, Wii U never captured the interest of consumers, falling behind to newer devices like Microsoft’s Xbox One and Sony’s PlayStation 4. To date, Nintendo has sold more than 13 million Wii U consoles.

The low interest also pushed away third-party game publishers from launching games for the platform. However, Nintendo has signed several big names to partner with them on Switch, including Activision, Electronic Arts and Ubisoft.

The Thursday event could shed light on how many of those third-party games are unique to Switch or are current titles re-released for the new Nintendo device.

Nintendo plans to stream the event on its website, as well as on video platforms Twitch and YouTube.

Did you find these tips helpful? Want to know more about any other hack? Please feel free to drop a message and let us know if there’s any specific hack that you wish to learn about. Follow Techlone on Facebook, Twitter and Google+
consoledetailsexpectedgamelaunchNintendoshareSwitch
0 500
Share FacebookTwitterGoogle+LinkedinPinterestStumbleUponReddItTumblrDiggWhatsAppEmail

The Long History of the White Van Speaker Scam