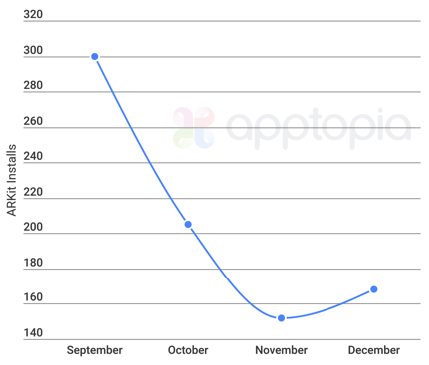 Apple’s ARKit augmented reality framework has seen only modest adoption from developers since it was announced at the Worldwide Developers Conference, while growth has seen a steady decline since its official launch, according to App Store data gathered by Apptopia.

ARKit enables iPhones and iPads running iOS 11 to superimpose computer-generated graphics over the real world, allowing developers to take their apps beyond the screen and into the user’s environment.

By using the built-in camera, processors, and motion sensors found in iOS devices, virtual content appears on top of real-world scenes, and users don’t need any special equipment to enjoy them because ARKit does the heavy lifting.

But despite initial excitement over the technology and a general consensus that Apple has improved upon existing AR solutions like Google Tango by making ARKit simpler to use, take-up by iOS developers saw a steady decline in the second half of 2017.

In ARKit’s launch month of September, developers released approximately 300 ARKit-related apps, while October saw an additional 200 or so enter the App Store, according to third-party data provider Apptopia. However, in November the number of ARKit-based apps fell to about 156, before recovering somewhat to around 160 in December. Overall, ARKit is said to have been used in about 825 of the over 3 million apps in the App Store since its debut. 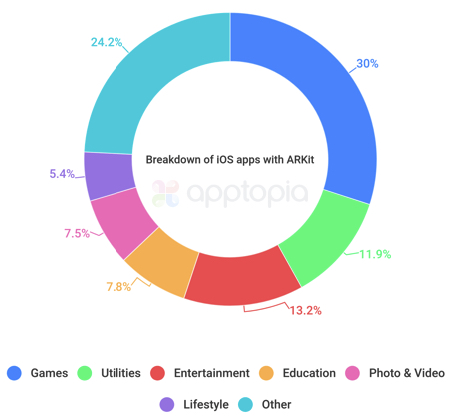 As it stands, Apptopia reckons 30 percent of ARKit-using iOS apps fall into the games category, 13.2 percent are entertainment, and 7.5 percent are photo and video apps. Meanwhile, 11.9 percent are utilities, 7.8 percent are educational, and 5.2 percent are lifestyle apps, with the remaining 24.2 percent coming under the Other category.

Apple CEO Tim Cook has expressed his belief on several occasions that a big future lies ahead for augmented reality. In fact, Cook has said that he’s so excited about the possibilities for the future of AR that he just wants to “yell out and scream”, while admitting that there are limitations to the technology in its current state.

At the same time, Cook believes that those limitations are the building blocks of an “incredible runway” with a bright future, and that “when people begin to see what’s possible, it’s going to get them very excited—like we are, like we’ve been”.

Did you find these tips helpful? Want to know more about any other hack? Please feel free to drop a message and let us know if there’s any specific hack that you wish to learn about. Follow Techlone on Facebook, Twitter and Google+
ApplesARKitDeveloperFrameworklaunchSeptemberSlowed
0 511
Share FacebookTwitterGoogle+LinkedinPinterestStumbleUponReddItTumblrDiggWhatsAppEmail

The IndieBeat: Las Tractoradas shows how Catalonia is trying to escape the reins of Spain